Basilica of San Piero a Grado 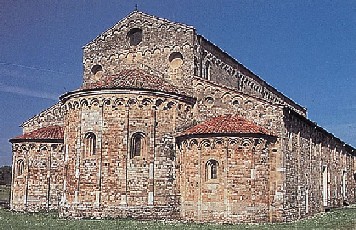 Basilica of San Piero a Grado

The Basilica of San Piero a Grado, where tradition says Saint Peter landed during a trip to Rome from the Aegean, was founded in the eleventh century on the remains of an early Christian temple of the fourth and fifth centuries. Example impressive Romanesque-Pisan, built in tufa stone and white marble from the Roman ruins, the church of San Piero a Grado is characterized by a double row of apses to the east and three are facing only one west, with the main door on the north side. The external ornaments are made by pilasters, blind arches and ceramic basins of Islamic derivation. Within the threefold order is made by large columns with capitals and arches decorated in red, they are represented above all the Popes until the fifteenth century. The Lucchese Deodato Orlandi painted the "Facts of Life of St. Peter." Ancient ruins of a sacred building of late antiquity, in the part facing to the west, have been uncovered and are being studied.