Church of St. Martin in Chinzica 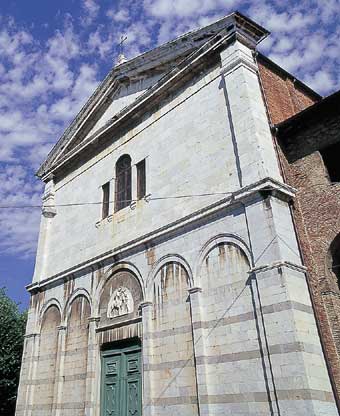 Church of St. Martin in Chinzica

The church of San Martino was founded in 1332 by Boniface Gherardesca. The large brick building, with sides and apse decorated with pilasters and arches enhanced by hanging ceramic basins, the originals are kept at the Museum of St. Matthew, was renovated in the seventeenth century, fourteenth-century frescoes inside are by Giovanni di Nicola , Antonio Veneziano and Cecco di Pietro.
In the same century belongs the fine relief of "St. Martin and the poor" by Andrea Pisano, originally placed on the facade, while the second half of the thirteenth century was the Crucifix of Pisa Henry Tedice. On the main altar are the remains of Santa Bona, the patron saint of Pisa secular flight attendants.